How to Remove Lint From Clothes [ Easy Hacks ] It is very rare to see lint-free clothes in a wardrobe. Most of us would have faced the same problem and tried different methods to remove it but failed to do so. Especially from those black trousers that fit you so well! Ugh. Worry not, our ways and means are here to find a solution. Here are a few tried and tested hacks to remove lint or pilling from clothes and have fuzz-free clothes.

Lint is the short fibres in the cloth, forming a bundle that sticks on the garments. It happens when two fabrics rub together, for example, during washing and drying or when the clothes are stacked. Removing pilling from the clothes does not take long. This article is all about a few easy hacks on how to remove lint from clothes, so read the full article to know how to save yourself from lint and its 99 problems.

How To Remove Lint From Clothes?

1. Use a lint roller 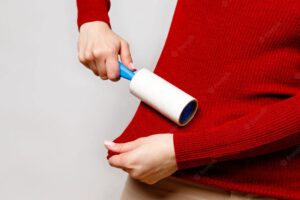 Using a lint roller is the greatest, easiest, and most hassle-free way to remove lint from your clothes. Lint roller is available everywhere, and you can easily buy it from any local department store or a pet store. It is a convenient and time-saving method to remove the lint or pilling from clothes. You can use a lint roller many times. After you roll it once, remove the used layer and start using the next layer. It is available at a very affordable cost too.

Does last minute plan to leave you with no time to rush to the store? We have a quick fix for that too. You can try a homemade lint roller hack. All you need is a rolling pin and tape. Roll the tape around the rolling pin in such a way that the sticky part of the tape is outward. Then roll it in your cloth as you do so with a lint roller. All the particles would get stuck to the tape, ta-daaa – you get fuzz-free clothes.

2. Use a pumice stone 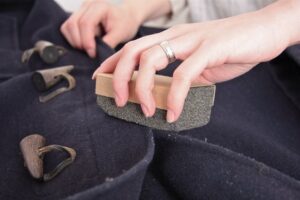 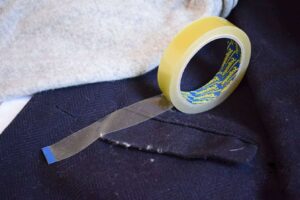 There is always an alternative method. You can also stick the tape on the dress directly above the lint and peel the tape gently. The lint would get stuck on the tape. It is one of the methods to remove pilling and an easy one too. 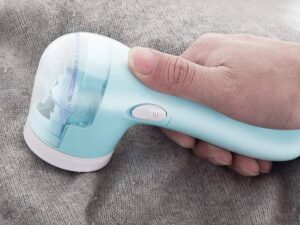 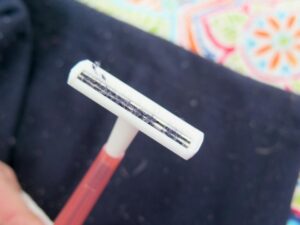 6. Use an electric lint roller

Using a toothbrush does not cause any damage to the dress. All you need to do is to swipe on the lint side using the bristles of the brush. It will be easy to remove as all the tiny particles accumulate together. It is one of the most effective ways to remove lint from clothes.

Do you know: Detergents act as an agent that bridges the water and oil particles, allowing dirt to be caught in oil and hence removed from clothing.

How To Prevent And How To Remove Pilling From Clothes

We know this is a ‘How to’ but prevention is better than cure, to make it more apt. Knowing the hacks to remove the pilling on one side and how to prevent it on the other. Here are a few hacks which act as a prevention and tips to remove pilling from cloth.

1. White vinegar and water method: Mix white vinegar with water to dilute it. Add that diluted liquid while washing clothes. This helps prevent the cloth from forming lint and removes the existing pilling.

2. Try the inside method: One of the most useful hacks is to wash your clothes by flipping them if you are thinking, “how to remove pilling from clothes?”. This method prevents your cloth from lint and makes it durable. Flipping and washing the clothes ensures that the cloth’s soft surface will not have friction and it doesn’t rub with each other. Thus it reduces the formation of lint on the clothes. Easy like Sunday morning!

3. Wash the cloth separately: Most fabrics like wool, cotton and linen tend to form lint. Washing such fabrics separately from other materials helps prevent and reduce the formation of lint.

6. Use a comb: The lint in the cloth can easily be removed with the comb. Not to scratch the threads of the fabric but can gently collect and remove the layer of fizz with the comb teeth.

7. Using a scrub pad: Scrub pads are a great tool for removing the pilling from the cloth. As it has a rough texture, it collects and holds even tiny particles of fur or lint. The added advantage is that it is not a harmful material to the clothes, and this is one of the practical hacks if you are thinking, “how to remove lint from black clothes?”.

Did you know: In 1907, Otto Rohm was the one who introduced the use of enzymes in laundry cleaning.

How to remove lint from black clothes 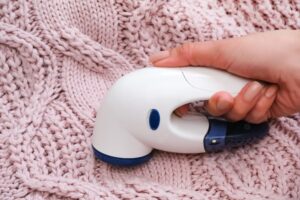 There is no worse scenario than getting lint in the all-time saver, black clothes. It is a nightmare seeing pilling in black clothes as it will be more visible and tarnishes the dress. Not to forget, you look like someone who doesn’t have time for laundry. But we kbow you are not. Else, you wouldn’t be reading our blog. Here are a few tips to overcome such nightmares and these most tried and tested, practical hacks if you are thinking, “how to remove lint from black clothes?”.

1. Use dry sheets: Using dry sheets in your laundry is always advisable. It acts as a great softener to the cloth and also reduces pilling. You can use the sheets while washing and even directly on the clothes to wipe out the lint.

2. Wash it again without detergent: To remove the lint from the black cloth, you can wash it separately without adding any detergent or softener. This method helps you to get rid of the pilling.

3. Use dryer balls: Dryer balls help reduce the lint as it is intended to keep the dresses separate without getting tangled in the dryer. But when using the dryer balls, you must always ensure that you change them after using them for a certain number of washes.

Laundry without much effort?

Laundry is a chore that most out there hate to do. But it is no more when you get a laundry service company which takes care of your work. We are here to offer you the best results and premium laundry services in and around Hyderabad.

No more worries if you have piled up clothes with lints and wonder how to remove them or didn’t find the time. Book your laundry service and get it done within two days. Book now by downloading the app at Play Store or App Store and take advantage of exciting deals on your first service.

This article would have given you an idea of how to remove lint from clothes, prevent pilling from clothes, and have fuzz-free dresses. These are a few effective tips and tricks to remove lint without spending much time and resources. Try these hacks if you come across such situations. How to Remove Mould Stains from Clothes and Fabric 11 Tips on How to Clean Your Silk Saree How to Remove Oil Stains From Clothes 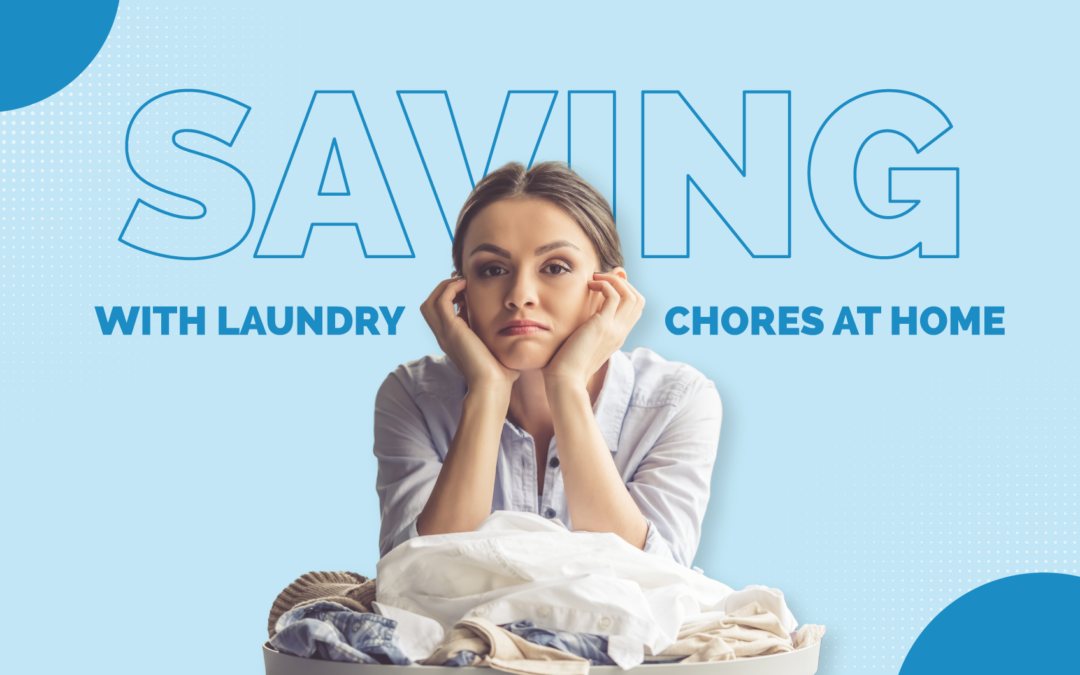 SAVING, WITH LAUNDRY CHORES AT HOME 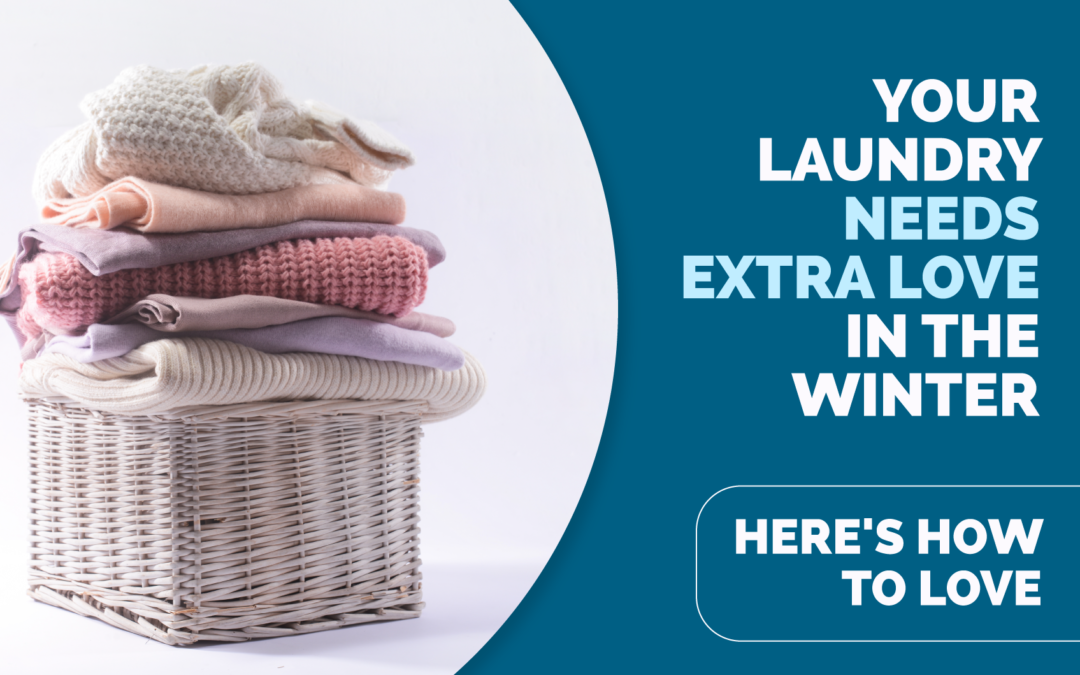 Your laundry needs extra love in the winter. Here’s how to love. 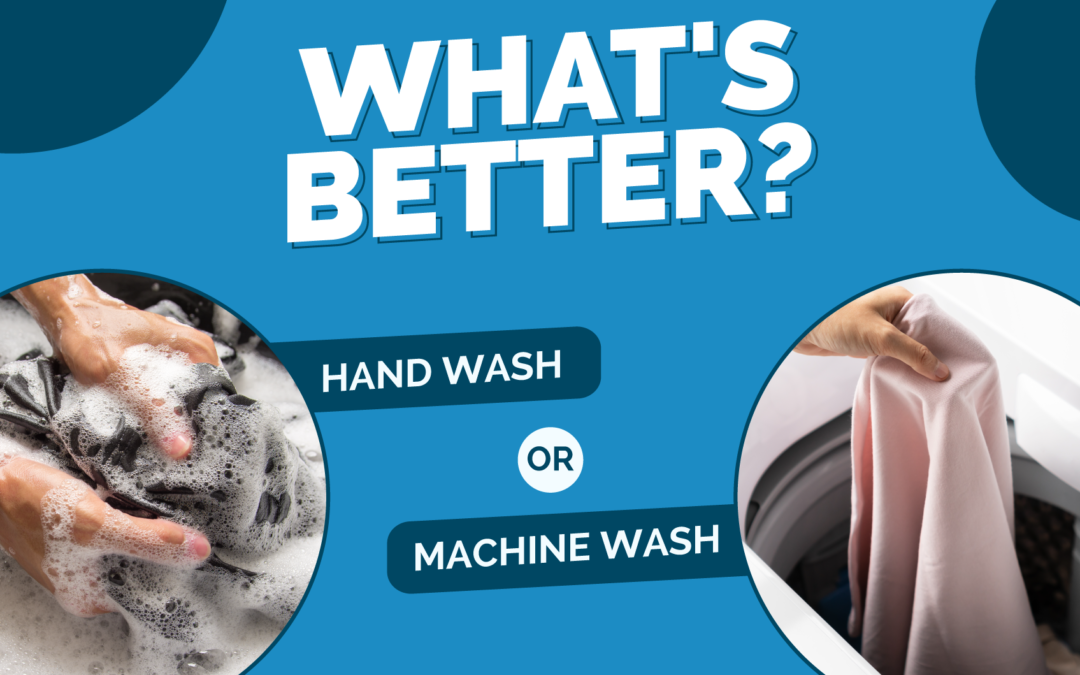 How to Remove Mould Stains from Clothes and Fabric

Summary: Winter is Here. We all have been there, going through a rough situation on how to remove...

11 Tips on How to Clean Your Silk Saree

Summary  We all love dressing up in sarees and stocking up on sarees of all types, whether we’d...

How to Remove Oil Stains From Clothes

Nothing ruins the mood of savouring your favourite meal as much as staining your dress does. And...